Robust Flat Tape Made of PVDF. High-quality PVDF tape easily rolls up, stays flexible, and stays straight inside the well, regardless of temperature. The flat ribbon is mounted on a robust and well-balanced reel. On the front plate is the 9-volt alkaline battery drawer. Permanent laser markings in 1 millimetre or 1/100-foot increments ensure accurate readings. Copper plated stainless-steel braided conductors resist corrosion, provide strength by preventing elongation, and allow the tape to be spliced for repair. The tape design reduces adhesion to wet surfaces. 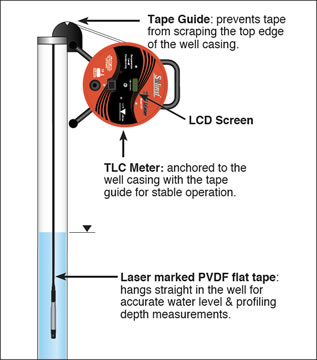 Conductivity measurements are read from 0 to 80,000 µS / cm with readings with an accuracy of 5% of the reading or 100 µS (whichever is greater). The “smart probe” shows the conductivity that was standardized at 25 ºC, that is, specific conductance (shown as EC). The temperature conductance coefficient is 2.0% per ºC. The accuracy of the Temperature is ± 0.2ºC from -15 ° C to + 50 ° C.

When the probe zero point comes into contact with water, the electrical circuit is completed, briefly activating the auditory signal. The display screen turns black for a second. At that time the water level measurement is taken with the tape. When the probe is removed from the water, a short audio signal announces to the user that the probe is out of the water.

The unit is supplied with the tape guide for use when profiling. The guide allows water level measurement to be made using the marking at its centre which provides accurate and repetitive level measurements. The guide protects the tape against damage from the strut edges.

The TLC probe operates in a temperature range between -15 ° C and + 50 ° C (23 ° F to + 122 ° F). The user can choose to have the readings display on the screen in ° C or ° F. Accuracy is +/- 0.2 ° C in Celsius, or +/- 0.4 ° F in Fahrenheit. The ‘smart’ sensor automatically adjusts conductivity measurements and displays specific conductance. This results in standardized repetitive measurements, comparable over and over again.

When the unit is turned on, the display shows conductivity and temperature.

Display on Conductivity and Temperature Screen

The on-screen menu is easy to operate. When the unit is turned on the display displays electrical conductivity and temperature readings in or out of the water. If the ‘ON’ button is pressed for 2 seconds and released, the display moves to the next menu. Press the ‘ON’ button 2 times quickly in any window and the screen will show the action displayed.

We use cookies on our website to give you the most relevant experience by remembering your preferences and repeat visits. By clicking “Accept All”, you consent to the use of ALL the cookies. However, you may visit "Cookie Settings" to provide a controlled consent.
Cookie SettingsAccept All
Manage consent

We use cookies on our website to give you the most relevant experience by remembering your preferences and repeat visits. By clicking “Accept All”, you consent to the use of ALL the cookies. However, you may visit "Cookie Settings" to provide a controlled consent.
Functional
Functional cookies help to perform certain functionalities like sharing the content of the website on social media platforms, collect feedbacks, and other third-party features.
Performance
Performance cookies are used to understand and analyze the key performance indexes of the website which helps in delivering a better user experience for the visitors.
Analytics
Analytical cookies are used to understand how visitors interact with the website. These cookies help provide information on metrics the number of visitors, bounce rate, traffic source, etc.
Advertisement
Advertisement cookies are used to provide visitors with relevant ads and marketing campaigns. These cookies track visitors across websites and collect information to provide customized ads.
Others
Other uncategorized cookies are those that are being analyzed and have not been classified into a category as yet.
Necessary
Necessary cookies are absolutely essential for the website to function properly. These cookies ensure basic functionalities and security features of the website, anonymously.
SAVE & ACCEPT